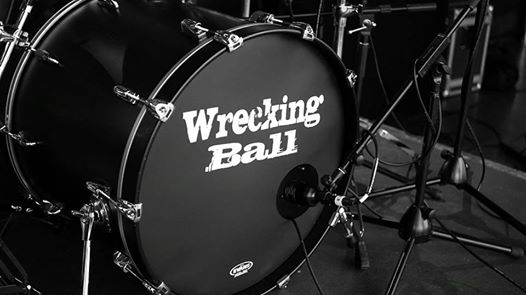 With his deep voice and that country twang, Front Man Mark is known as the UK's country music outlaw, and is widely regarded as having one of the best voices in British country music today. mark has more than 13 years experience of touring the Country music clubs & festivals in the UK, Europe and Nashville. In the short Space of 3 years he was nominated for 7 British Country Music Awards and winner of 2 BCM Awards. For 10 years Mark was one half of the multi award winning duo 'Spur', and has played as one part of the duo 'Renegade', and was the front man for the 'The Family' band. Mark now fronts Wrecking Ball - fast becoming the most sought after country-rock band in the UK
Wrecking Ball have just completed their first summer on the festival circuit and what a summer it was. festival organisers have been keen to add something really different into their lineup that both capitalises on the growing popularity of country music, yet is also easily able to "cross over" to a wide and diverse audience. In 2017 Wrecking Ball appeared in opening supporting and headline slots in festivals across The South west, including being the opening act for the famous Sheppy's Cider at their SheppyFest 2017, which this year was headlined by the Hoosiers. Other festivals in 2017 included headline billing at Oakfest 2017, as well as hewishstock, Hobphin Festival and Rimpfest 2017.
Playing Originals from Wrecking Ball and covers from the likes of Zac Brown, Eric Church, Keith Urban to Alan Jackson, Merle Haggard, Johnny CASH and Glen Campbell and many more

Other events in Sidmouth

Page generated in 0,052743 (0,001321) seconds.
We use cookies to ensure that we give you the best experience on our website. If you continue to use this site we will assume that you are happy with it.OkRead more