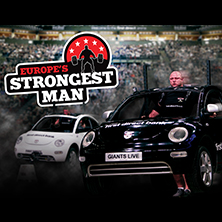 You´ve seen them on the telly; now come and see these true Giants up close and in person! Expect an intense atmosphere and an adrenaline filled Arena – this is live strength sport and entertainment at its absolute biggest and best! The best of Britain take on 5 Herculean tests of strength to see who will be crowned Britain’s Strongest Man 2019 at FlyDSA Arena, Sheffield in January 2019. Watch the BIGGEST, most powerful men in the world race against time - and each other - as they compete for the

Other events in Sheffield

#SaveSheffTrees - I Stand with Great Trees of Sheffield

Page generated in 0,128752 (0,026778) seconds.
We use cookies to ensure that we give you the best experience on our website. If you continue to use this site we will assume that you are happy with it.OkRead more